This is a phrase associated with the 2015 #feesmustfall and #rhodesmustfall movements: South African students are fighting for the right to a free education and decolonisation of the university system.

They are also fighting against the legacies of apartheid and colonisation that has left us one of the most unequal societies in the world, with the poor predominantly black, and the privileged predominantly white. They are fighting for societal transformation.

Last year the successes achieved by these movements reverberated around the world, and they continue to provoke and challenge South Africans in the early months of 2016 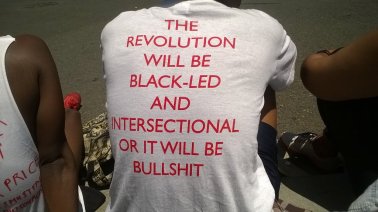 There is much that is fascinating about the student movements. But one of the things that captures my attention as a complexity scholar is their insistence on intersectionality. I’ve no doubt my understanding of this is still limited, but here’s a try: it is that the objectives of the revolution are multiple, and can only be realised together. Not only fees must fall, but also colonialism, unfair labour practices, gender inequality, prejudice and privilege and exclusion in any form.   True to a complexity perspective, nothing is separable in a complex dynamic system, even in its conception.

What can we learn from #feesmustfall?

Right now, I have a question for the students, excruciatingly aware of my position as a white, older, privileged member of our society, a member of a highly educated elite: how can my policy community of practice speak into your revolution? For as I see it climate change, both mitigation and impacts, in South Africa, are absolutely inseparable from the other issues you have identified.   Transformation of our society to one that is low carbon and just is a national policy objective, but one which we are far from understanding how to achieve.

Perhaps because of who we are as individuals, and as a policy collective, we have not yet been able to understand what is needed in order to connect with the objectives of powerful systems transformation movements such as yours.

But I’m wondering, with humility, whether intersectionality as a concept might be something we can work with.